Back in 2014 Alex Sembo became the first Change Maker to be a recipient of an Ammalife Bursary. As a clinical officer, Alex was moved by the misery of mothers suffering fistula (a tear in the wall of tissue between the bladder and the vagina) after constructed labour. Tragically, this condition is still common, and brings not only the physical distress of incontinence but also social isolation, as many of the women affected by the illness are regarded as unclean and shunned. To help his patients, Alex established a fistula repair clinic, a job that few others were prepared to do. Over the years, he developed his expertise and was soon highly regarded by fellow clinicians as well as hundred of mothers whose lives he had transformed. When the University of Warwick developed a course in obstetrics and leadership for clinical officers, Alex was invited to be one of the examiners.

Nevertheless, Alex remained humble, staying conscious of the gaps in his knowledge of basic medical sciences. So, when the chance to learn at the College of Medicine in Malawi arose, he was eager to take it. However, he needed help with his fees. At this point, inspired by Alex’s dedication and his track record of serving his local community well, Ammalife stepped in. His studies enabled him to deepen his knowledge and understanding of medicine, in order to enhance his clinical practice, and gave him renewed confidence to train the next generation of fistula surgeons.

During his studies Alex worked with the United Nations Population Fund to organise fistula camps in Malawi and Zambia. He travelled to district hospitals for three weeks at a time to operate on affected mothers, usually helping more than a hundred women in each three-week period. At the same time, he trained clinicians in surgical procedures, putting his newly gained theoretical understanding to good use.

After his tenure as an Ammalife Change Maker ended, we have been delighted to maintain our link with Alex in several different ways. He generously supported the Ammalife student group at the University of Birmingham by participating in live discussions via Skype. He is always on hand to coordinate our donations of essential medical equipment and textbooks when they are received in Malawi.

Back to our Change Makers Page.

Above and Below: Dr Alex Sembo at work at the hospital in Malawi 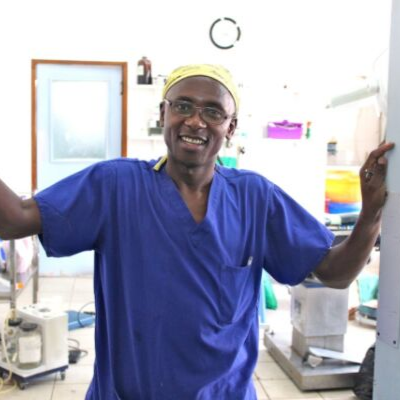